Hello Sudzers!  Just a quick reminder that our next meeting is this Friday, April 5 at 7pm at Nick’s house.  Need the address or directions?  Email moresimcoe@sudzers.org

Reminder: Bring your recipe – club members will have lots of questions!

Sign your beer in on the whiteboard along with your name and statistics (IBU, ABV, etc. – optional, but helpful in determining tasting order)

See you Friday! Next upcoming club meeting – Friday, May 3

Pete Slosberg, best known for Pete’s Wicked Ale and Mavericks: Not Yet World Famous Session beers, joined a crew of homebrewers and pitmaster Dan Frengs on New Years Day to smoke malted barley along with various BBQ meats. Brewers from the Silicon Valley Sudzers homebrew club were invited to participate in a competition to brew beers using the smoked BBQ malt. Each brewer received three pounds of smoked malt per entry. While enjoying delicious BBQ, attendees will have the opportunity to judge which of the beers best pairs with the BBQ and which of the beers is “smokiest.” 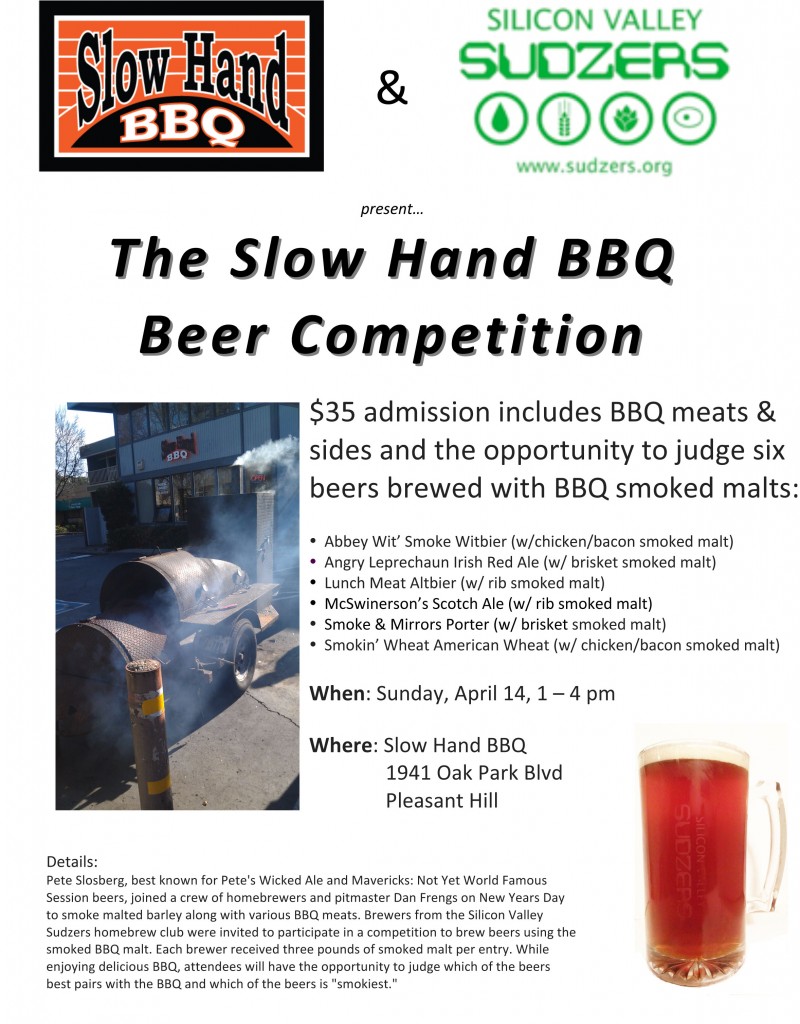 Happy St. Paddy’s Day! Here are the notes from the March 1 Sudzers meeting.

Special guest speaker Tom Boheme talked about the San Jose Cooperative Brewery and Pub that is in the works. Individuals can buy into the co-op for $150 in order to receive member benefits, including a vote in selecting what is brewed, potentially dividends, and of course bragging rights. The plan is to serve a standard set of brews, with rotating seasonals created and brewed by co-op members. Critical mass to launch is 2000 investors, they have just over 100 now. The next board meeting of the co-op is March 23 – visit their meetup page for details. The membership application form and disclosure agreement are available for download for anyone interested.

Derek talked about the upcoming BBQ smoked beer competition event featuring six Sudzers-brewed beers incorporating BBQ smoked malts. The event will held on a Sunday in April at Slow Hand BBQ in Pleasant Hill (now set for April 14 – mark your calendars!) Stay tuned for more details. We are hopeful that The Brewing Network will be able to join us for the competition.

A gentleman whose name I can’t remember talked about an opportunity for Sudzers to have a brewing demo or other way to promote the club at the Palo Alto Concourse d’Elegance classic car show on June 30. If anyone is interested in doing so, let Derek know.

Steve Casselman and Keith McKay presented a session on how to use the categories of the Beer Judge Certification Program (BJCP) scoresheet to evaluate beers. As a follow up, we did a guided discussion on three of the evening’s beers, reviewing the Aroma, Appearance, Flavor, Mouthfeel, and Overall Impression of each.

The March Thirsty Third Thursday meetup will be held at Harry’s Hofbrau San Jose on March 21. For the April 18 meetup, we’ll go to Harry’s Hofbrau Redwood City. Next club meeting will be 7 pm April 5 at Nick’s house.

The homebrews from the March meeting included:

The Bistro in Hayward hosted the ever-popular 13th annual Double IPA Festival yesterday, and the Festival just keeps getting bigger and better. Yesterday’s tap list included 59 Double IPAs (with only two clocking in under 8% ABV) and 23 Triple IPAs (with two topping out over 12%), and over half the brews in both categories were listed at 100+ IBUs.

Several Sudzers attended the event to enjoy the hoppy goodness, and we were delighted that former Sudzers Homebrewer of the Year Guy Cameron of Russian River Brewing, got to collect two medals for Russian River brews. 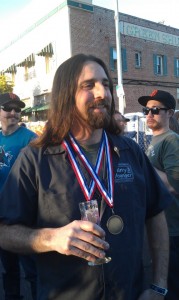 In addition to the public tasting and voting for the People’s Choice award (which was a three-peat for Kern River Citra Double IPA) the Bistro also has a panel of well-established judges do a blind tasting of all of the beers at the festival. The results for 2013 were as follows:

Complete tap lists for your enjoyment: 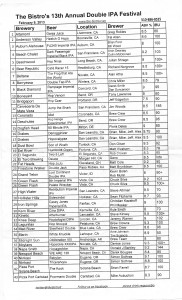 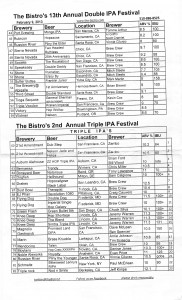 Erstwhile South Bay beer scribe Andy Lee has put together a listing of some key South Bay events during SF Beer Week. Hope to see you at some of these excellent events!

Derek reported that there were some issues with SF Beer Week promoting an event centered around homebrewed beers, so the group is seeking a date in March for its BBQ beer competition event at Slow Hand BBQ in Pleasant Hill. Marcus is in touch with folks from the Brewing Network about the possibility of a live broadcast or other coverage/promotion/partnership. Attendees will pay an entrance fee that will include various Slow Hand BBQ meats, as well as an opportunity to sample and judge the best beer for pairing with BBQ among the six beers brewed with BBQ smoked malts (more info about this project).

Even without our BBQ Beer event, SF Beer Week does still have quite an impressive array of events planned, including the Bistro Double IPA fest on 2/9, Meet the Brewers on 2/16, and numerous special events at Harry’s Hofbrau San Jose, including a Stone Tap Takeover with Mitch Steele on 2/13, Firestone Walker XVI component tasting on 2/15, and an IPA festival including Pliny the Younger on 2/17. A few events have been added to the Sudzers calendar, but plenty more are on the SF Beer Week website. If you’re planning to go to an event, feel free to post something to the email list encouraging others to join you.

February’s Thirsty Third Thursday meetup will be held at Freewheel Brewing in Redwood City on 2/21. Club members usually drop in for TTT any time between 6:30 and 9:00 pm.

In addition to the usual array of tasty food served at our meetings, a special shoutout to Adrienne for making a delicious chipotle mac n cheese incorporating Liza’s Jalapeño Chile Ale from the January meeting. Adrienne also shared an impressive list of the brews and locations she and Gary visited in Portland recently.

Many people remarked on the particularly high quality of homebrews presented at the February meeting. Kudos to all of the brewers for an outstanding job!

Chris’s Het Goede (The Good) Belgian Blonde (7.3% ABV, 19 IBU), which has been entered into a competition for possible production and distribution, and which club members also suggested should be entered into NHC

Marcus & Tyler’s WheatWine (7.5%, 25 IBU), brewed with Ben Dobler from Widmer at the Explore Your Craft event in SF in October (more info about this project)