Keith and Mike, co-Homebrewers of the Year, received the newly engraved Sudzer Cup from new co-Presidents Tyler and Nathan 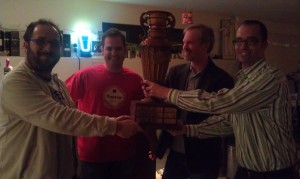 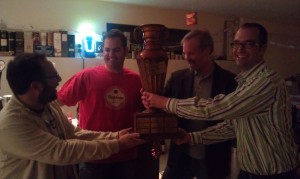 Nick presented the annual club financial report, which shows a reasonable cash balance at year-end, but we did spend more than we took in during 2012 (you can help offset this imbalance at the February meeting by purchasing one of the few remaining club t-shirts!). Paid memberships were up significantly – about 50% over the prior year. The officers decided to raise dues slightly from $20/year to $25/year for 2013, still a bargain when you take into account special rates for club events, bottles of the club brew Dark Matter Russian Imperial Stout to be distributed some time during the year, and of course the 10% discount at the MoreBeer Los Altos store. A number of memberships were sold in January, and we will collect dues in February from anyone interested in paying who didn’t get a chance in January.

Derek and Chris R. described the Sudzers/SlowHand/Slosberg Collaborative BBQ beer project, which involved co-smoking about 20 pounds of two-row malt along with various meats in the smoker at Slow Hand BBQ in Pleasant Hill on New Year’s Day. Six beers have been brewed with the smoked malts, and the tentative plan is for them to be served along with Slow hand BBQ at a ticketed event at Slow Hand on February 10 (the first Sunday of SF Beer Week). Most of the brewers reported that the smoke aroma was quite distinct in the mash if not the boil kettle, and preliminary tastings of wort did not provide much smoke aroma but definitely did have some tasty smoke flavor on the finish. Derek brought a bit of remaining brisket-smoked malt to the meeting for people to smell and taste.

The club decided to rotate the locations of Thirsty Third Thursday meetups in 2013, although Harry’s Hofbrau San Jose will certainly remain in the rotation. The January 17 meetup will be at Harry’s Hofbrau Redwood City. People usually arrive anywhere from 6-8 pm depending on work schedules and other commitments.

Homebrew tastings were slightly down, with only 9 homebrews to taste from the 30+ homebrewers in attendance (no doubt everyone has made brewing more a new year’s resolution and we’ll see more at the February meeting!) Brews included:

Next meeting date will be February 1, 7:00 pm at Nick’s House